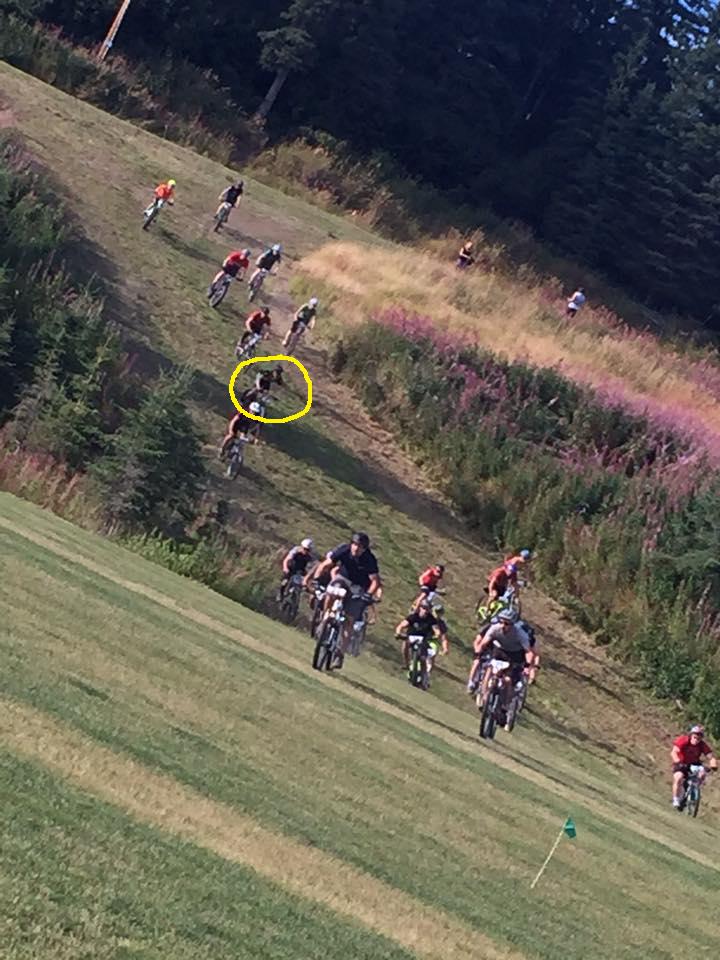 You can see me in the back of the field.

The race started off poorly. I was putting something in my seat pack when the starter said racers ready, and by the time I raised up to say no, the race was a go. Barreling down the hill behind the pack I tried to make up ground across the field and through Rabbit. An ominous clack sounded from the rear end of my Farley 5 fat bike as I passed a rider approaching Kill Bill. Sure enough, rising back up Collins Hill my derailleur jammed causing me to hop off the bike and manually shift the rear derailleur back into gear. I lost most of the ground I had made up on Kill Bill and as we cruised through the S turns on Wolf my rear gearing began to click and pop. Jammed up behind some walking riders on a singletrack section, I hopped back on my bike on the main trail prepared to put the power down only to snap my chain. I hastily threw my bike on the ground, pulled out my chain tool and set to work as most of the field passed me by. The chain re-assembled in a little over a minute I hopped back on the bike. Bike Down, Tools Out.

First crank and snap, the chain broke again. I must not have gotten the pin all the way back in. This time the repair took several minutes, as I had to remove multiple links. Pretty immediately after the second break, the rest of the field passed, and Brian, who was taking pictures at the site, moved on the capture those still in the hunt for glory. Several Links came out this time, then the bugs started biting.

By the time I got the chain fixed all the riders were long gone, and I knew my race was over. Valiantly hoping to sandbag my times for the controlled start race, I hopped back on the bike determined to finish by riding hard. Through Wolf and Fox I rode well and truly alone, catching the first back marker on the top of the Bear descent. I screamed down Bear trusting in the 5″ tires through the sandy patches topping out at 30.7 mph. Pretty fast for a fatbike. As I made the turn onto the M4 singletrack I saw the group of riders I usually stay in contact with beginning the climb back up Bear, easily ten minutes ahead of me.
I cooked it around Wolverine to the singletrack, where I passed a couple more riders. Pulling out of the singletrack I had to stop and stretch my back out, then it was a nice long drag up Bear (with a little walking on the steep bits). On top of Bear Brian was helping usual female victor Kara realign her derailleur.

Coming up the top of the major climb, Bear.

From the top of Bear it was up and down hills and one more racer passed before I popped out on Eagle’s Perch above the school and headed back towards Wolf. A little hidden singletrack took me to the power line where I crouched down and squeezed my way through another hidden pathway back onto the pool parking lot. With no riders ahead of me it was a one man drag race back to the sprint hills and the finish, where the early racers were already packing up and leaving. According to my record, barring the time I spent stopped, I raced on par with my usual time, but according to the official clock, I was ten minutes slower than usual. What can you do? Sometimes you just catch the unlucky breaks. I was happy to have finished, but I’m not sure I’ll ever race that fat bike again.